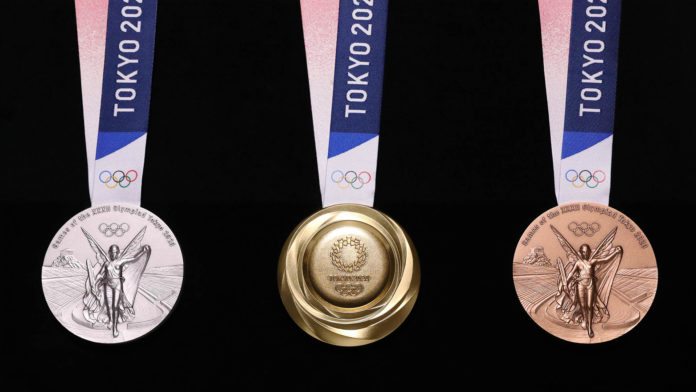 With less than a year to go, Japan has gone all out with preparations for the upcoming Summer Olympics. The organizing committee for Tokyo 2020 (TOCOG) has released the official designs for the Olympic medals, which were made entirely out of metal extracted from recycled consumer electronics. This initiative is part of TOCOG’s overarching goal of making the 2020 Olympics the most environmentally-friendly and sustainable Games yet.

The metal needed for the medals was collected through the Tokyo 2020 Medal Project, which saw donations pouring in from people all over Japan over the course of two years. A total of 78,895 tons of scrap electronics was successfully collected by the end of the collection period. This consisted of old phones, laptops, handheld game consoles, and digital cameras that would have otherwise ended up in landfills. From these devices, contractors were able to extract 30.3 kg of gold, 4,100 kg of silver, and 2,700 kg of bronze to make the 5,000 medals that will be awarded during the Olympic and Paralympic Games.

Apart from the Tokyo 2020 Medal Project, TOCOG will also be incorporating recycled plastic bottles as part of the materials used for the Olympic Torch Relay uniforms. The 100 podiums to be used for the victory ceremonies will be constructed from 45 tons of recycled household and marine plastic waste, which were donated by the Japanese public. Moreover, nearly 60% of competition venues will make use of existing facilities and utilize electricity from 100% renewable sources.

The Tokyo Olympic Games are set to begin on July 24, 2020. Fans can expect the return of 2016 Olympic greats like Simone Biles (USA, Women’s Artistic Gymnastics) and Eliud Kipchoge (Kenya, Marathon), as well as the addition of sports like surfing, karate, sport climbing, and baseball/softball.